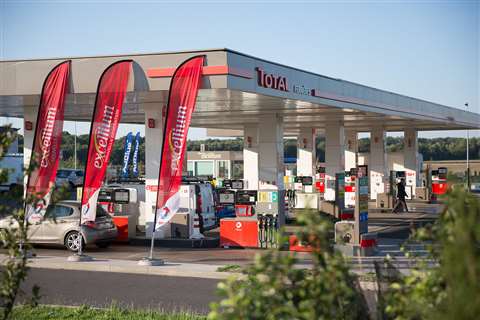 Daimler Truck and TotalEnergies have signed an agreement outlining the partners’ commitment to decarbonisation of road freight in the European Union.

The collaboration will see the two companies develop the vehicles and support networks for trucks using hydrogen fuel. There is a further intent to use the resulting network to promote the benefits of using hydrogen as a trucking fuel.

The plan is to arrange hydrogen sourcing and logistics, dispensing of hydrogen and development of hydrogen-fuel trucks, while also establishing a customer base.

TotalEnergies has outlined plans to have (directly or indirectly) up to 150 hydrogen refuelling stations in Germany, the Netherlands, Belgium, Luxembourg and France by 2030.

The statement also added that Daimler Truck will start delivery of hydrogen-powered trucks to customers in most of these countries by 2025. Previous releases from Daimler have outlined a customer launch date of 2027 for the GenH2 hydrogen-fuelled truck.

The two companies will also investigate ways to reduce the total cost of ownership of transport when operating on hydrogen fuel, within the regulatory framework of the EU.

Both Daimler Truck and TotalEnergies will remain members of the H2Accelerate consortium, which is also investigating ways to roll out hydrogen-powered transport across Europe.