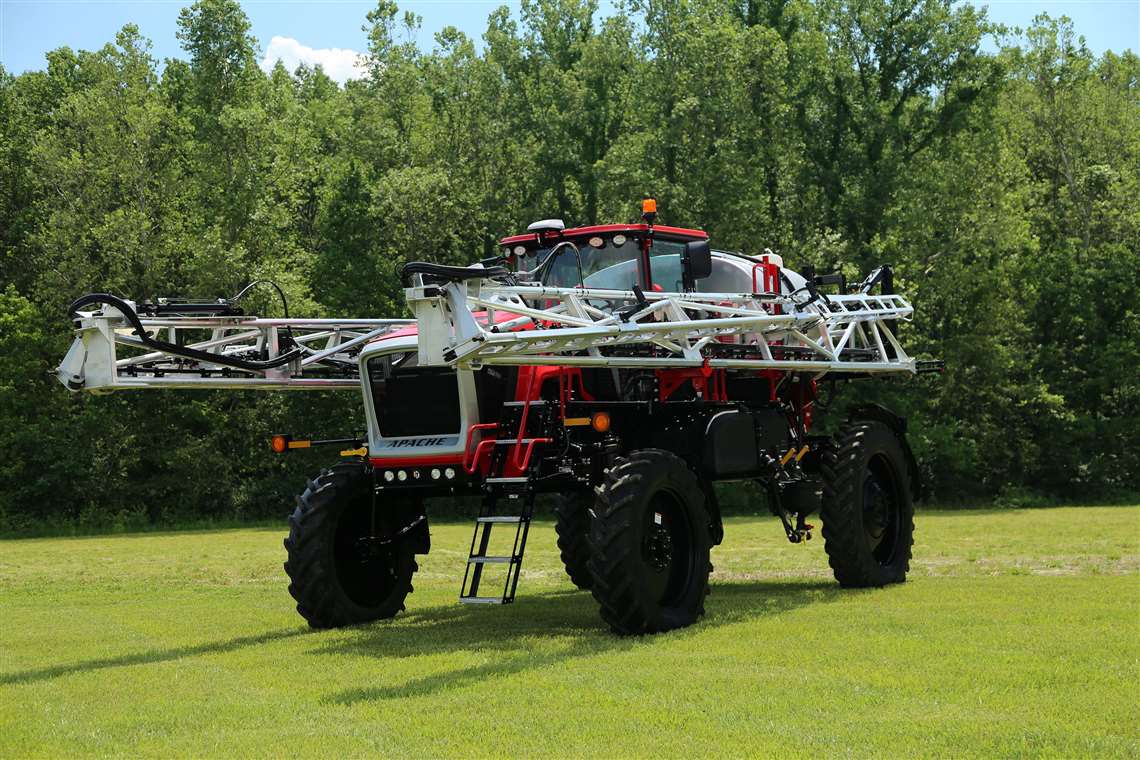 The 2021 Apache AS Series of self-propelled sprayers from Equipment Technologies were among the first in the U.S. to adopt Cummins Performance Series diesel engines. They are dual certified to comply with EU Stage 5 as well as U.S. EPA Tier 4 final emissions regulations. The engines will be used on the new Apache AS850, AS1050 and AS1250/XP sprayers.

Apache AS Series sprayers will be equipped with the Cummins B4.5 and B6.7, which the engine company said were designed with a simple architecture and to be EGR-free to ensure the powerplants are lighter and more compact than its predecessor. The design supports Equipment Technologies’ objective to provide farmers with lightweight machines to ensure less soil compaction and reduced fuel consumption.

Cummins said its new Single Module aftertreatment is up to 40% smaller and 20% lighter than previous systems and is positioned vertically on the new AS Series sprayers to facilitate new storage features, while maintaining visibility from the cab.

The sprayer specialist has used Cummins diesel engines for more than 20 years.

“With the new Performance Series engines, Apache AS Series sprayers receive a performance boost of up to 15% due to the increased power and torque available throughout the engine speed range,” said Veera Rajendran, vice president Engineering, Equipment Technologies, Mooresville, Ind. “They are also more productive on the farm, saving farmers 8% in fuel with an overall combined fuel and diesel exhaust fluid (DEF) saving of 3%. Not only does this have significant environmental and sustainability benefits, it also lowers operating costs – which is a big win for our customers.”

As the largest models in the new line, the Apache AS1250 and AS1250XP get 1200 gal. tanks with stainless steel as an option. The Cummins engine powers the all-gear final drives through a ZF six-speed transmission. Product is pumped by a hydraulic centrifugal unit from Hypro and then distributed to the field via 90 or 60/90 ft. steel booms. Owners can also opt for 100, 120 or 132 ft. aluminum booms supplied by Pommier America in Leland, Ill.

Equipment Technologies has focused on building mechanical-drive sprayers since 1997. In 2021, however, it will add a hydrostatic sprayer to the catalog. The crop clearance on the Apache HS1100 can be adjusted on the go from 60 to 70 in., which the company said makes it one of the tallest rear boom sprayers in North America and ideal for late-season application. It uses a Cummins 6.7L diesel engine rated 300 hp and a hydrostatic system from Bosch Rexroth to move its 1120 gal. tank through the field. Its enhanced LED lighting package uses 64 individual LEDs, located above the grille and cab and next to the fill station.