For much of the world, access to food is seldom an issue. In some regions, food security is a significant problem.

A good example is the United Arab Emirates. With almost no rainfall and temperatures frequently exceeding 105º F (40º C) in the summer months, the climate in the UAE is distinctly not favorable for growing crops outdoors. Thus, approximately 80% of the Emirates’ food is imported.

Seven years ago, agricultural supplier Themar Al Emarat began planning for a hydroponic farm that would provide locally grown, pesticide-free vegetables and produce for hotels, restaurants, wholesalers, retailers and supermarkets in the region.

The soil-less, recirculating hydroponic system was designed to provide a climate-controlled environment that could support high-volume commercial production of beef tomatoes, cherry tomatoes, lettuce, herbs and other crops.

Over time, the facility designers created planned five different greenhouses including a fully automated baby leaf system, greenhouse modules and open-air space to deliver high-quality crops using technologies that ensure the uniform growth and health of the seedlings. They also planned operations specifically dedicated to white button mushroom production, which would ultimately make it the largest mushroom farm in the UAE.

Also motivated by a commitment to sustainability, Themar Al Emarat officials sought to maximize the use of environmentally responsible processes throughout their operations. This would include the recycling of irrigation water, the reuse of soil from the hydroponic system as an agricultural conditioner for traditional cultivation and the use of bumblebees for pollination.

The 17.2-acre site selected in the northeastern kingdom of Sharjah, had access to groundwater and lots of sunlight, but lacked a final key ingredient – reliable power to provide energy for cooling equipment, water chilling, cultivation and myriad other greenhouse processes. As the local electric utility did not extend to the proposed location for the farm, Themar Al Emarat had to find a different solution.

Enter Al-Bahar, the exclusive Caterpillar dealer for the UAE, Kuwait, Qatar, Oman and Bahrain. In 2019, Al-Bahar, which supplies Caterpillar power systems, engines and equipment, was selected to design, install and commission a comprehensive hybrid microgrid solution for the site. The company ultimately developed what is considered to be the largest single-site microgrid in the UAE.

The system first became operational in 2020 and has been expanded since then, allowing Themar Al Emarat achieve all of its production milestones to date. The company recently expanded its yield of white button mushrooms from six to 10 tons a day, with total production capacity from its hydroponic operations surpassing 3.5 million plants per month.

“We researched best practices around the world to obtain the latest technology that would deliver the highest quality products for our hotel and retail customers,” said Dr. Ghanem Al Hajri, chief executive officer of Themar Al Emarat. “We selected systems that would make this project economically viable, save power and water and address the needs of the community as well as our shareholders.”

“What’s important with an integrated hybrid system is the ability to switch between power sources, whether it’s the generator sets, the energy storage or the solar panels,” said David Crabb, regional manager for Caterpillar Inc. “The MMC provides peace of mind for customers by perfectly integrating all the elements of the system based on changes throughout the day — sunup, sundown or cloudy conditions.

“The last thing you want is for the power to drop when you have critical production needs, whether it be cooling, heating, data. All of those are critical for the customer and how our customers make money.” 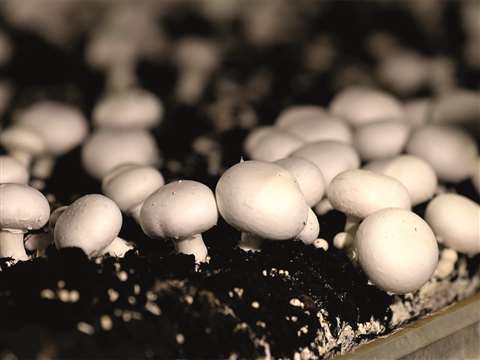 Themar Al Emarat recently expanded its yield of white button mushrooms from six to 10 tons a day, making it the largest mushroom producer in the UAE. (Photo: Caterpillar)

System operation and status is monitored through Cat Connect Remote Asset Monitoring, which provides data visualization, reporting and alerts from anywhere in the world through a simple web interface. “It provides a complete, remote interface that allows customers to see the live performance of all the power assets of the plant and make operational changes via a phone or laptop,” said Syed Shahul Zindhanainar, account manager for Al-Bahar.

Caterpillar’s power solution has helped Themar Al Emarat achieve all of its production milestones to date. The company recently expanded its yield of white button mushrooms from six to 10 tons a day, with total production capacity from its hydroponic operations surpassing 3.5 million plants per month.

“We now grow crops that the UAE used to depend on receiving from overseas,” Dr. Al Hajri said. “We have filled the gap by producing high-quality food that provides the quantities our customers need while meeting their quality standards.”

Under ongoing maintenance agreements, Al-Bahar can deploy technicians in about 20 minutes to deliver the services to help Themar al Emarat maximize its return on investment.

“By selecting a system from Al-Bahar as a single supplier,” Zindhanainar said, “they can trust us to manage the integration of multiple technologies and support the performance of the solution over the long term.”

Click here to see a video about the Themar Al Emarat microgrid.

The Key Components of the Microgrid
- Nearly 23,000 Cat PVT117 photovoltaic modules that generate up to 2.7 MW of solar power for the facility during daylight hours, roughly 50% of the facility’s overall load. The mono crystalline passivated emitter rear cell (PERC) photovoltaic modules are engineered to provide high performance with low temperature coefficients, maximizing energy capture.
The panel design minimizes white space between solar cells, eliminates reflective metal lines on the cells, and lowers electrical resistance between cells, increasing efficiency compared to conventional commercial modules, Cat said.
- Five Cat 3412 diesel generator sets, packaged in sound-attenuated, weather-resistant enclosures. Designed to deliver a combined 3.3 MW at 50 Hz, each unit is based on a 27.02 L, 12-cylinder 3412C TA diesel engine that drives an SR500 alternator, with engine and generator operation through Cat’s ADEM A5 engine controller and ECMP control panel.
- A Cat Energy Storage System (ESS), incorporating advanced lithium-ion batteries with high energy density and high discharge/recharge efficiency. The ESS can store 286 kWh/250 kW of energy for grid stability, compensating for fluctuations in output from solar array and reducing the reliance on the generator sets by as much as 5000 hours a year, Caterpillar said, saving both fuel and maintenance costs.
- Cat Bi-Directional Power (BDP) inverters that deliver reactive power with grid-forming and grid-following capabilities.
- A Cat Master Microgrid Controller (MMC), which is designed to efficiently manage the flow of power from every source in the system. 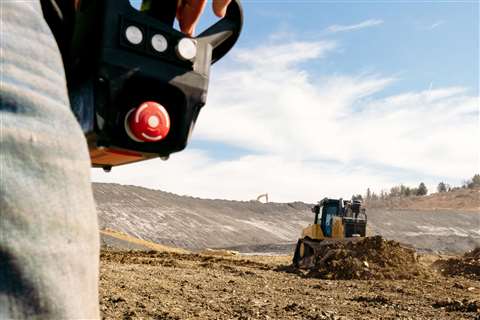 A deep look at Caterpillar’s approach to technology
ACE at work: CTO Karl Weiss talks about the integration of autonomy, connectivity and electrification