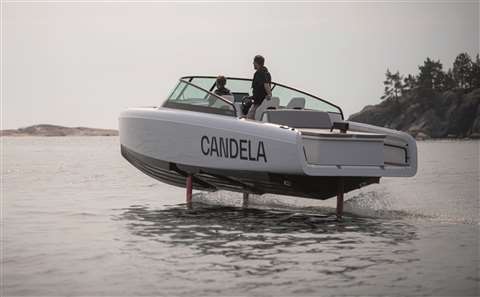 Candela has focused on turning the electric boat into a mainstream product since it was founded in 2014. The company has been especially busy in the past year: Its hydrofoiling speedboats are now in the hands of dozens of end users around the world, and it has opened a sales office in California’s Bay Area, announced commercial variants of its pleasure boats and selected a battery supplier – the latter being one of the most important developments for any electric vehicle.

Swedish electric luxury car brand Polestar will provide battery and charging systems for Candela’s flying boats, in a deal the latter company said will allow it to tap into automotive battery technology to swiftly scale up production and bring its mass market electric boats closer to reality.

“To make electric boats mainstream, we need to build thousands of boats every year,” said Gustav Hasselskog, founder and CEO of Candela, Stockholm, Sweden. “Polestar is a dream partner for us. While electrification of cars has come a long way in the last few years, the marine sector has fallen behind. Marrying our efficient hydrofoil technology to high-capacity batteries from Polestar means we can speed up the mass market adoption of electric boats together.”

Candela said the deal between the two companies is an attempt to overcome what it sees as two major hurdles to the electrification of boating. The first is the massive energy consumption of conventional powerboat hulls, which it said is an obstacle that has been cleared using hydrofoil technology. The company said the design cuts the energy usage of powerboats by up to 80%.

The second hurdle, said Candela, has been the prohibitively high cost of marine batteries. Boat builders, it said, typically rely on smaller boutique vendors of marine battery packs, and their relative scarcity and high unit cost have prevented electric boats in general from achieving parity with engine-powered vessels. 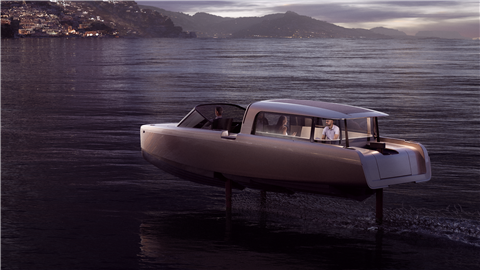 The Candela C-8 is the Swedish boat builder’s second model to go into production, following the limited run of C-7s. Sales have been particularly strong in the United States. (Photo: Candela)

“With this partnership with Polestar, we’re really standing on the shoulders of giants,” said Mikael Mahlberg, PR & communications manager, Candela. “Our days are filled with control systems for the boat, lightweight carbon composite manufacturing, hydrodynamics – that kind of technology. We have also made our own drivetrain. However, making a battery pack is a major undertaking, and we won’t get a better pack than the ones Polestar can produce because they spent millions of dollars to make their packs. There is a tremendous amount of engineering that goes into making car battery packs.”

In 2019, Candela sourced off-the-shelf battery packs from another supplier for its initial electric boat, known as the C-7, because its engineering team found it difficult to locate a supplier that didn’t see the startup as a “super niche maker of electric flying boats,” said Mahlberg. Some suppliers simply turned them down.

With a range of 50 nautical miles at 20 knots, the C-7 set several world records for electric boats. The planned limited production run of 32 units ended in 2021.

The C-7 was deemed a commercial and technological success, so the company followed with the C-8 leisure boat in the fall of 2021. The new boat helped set the scene for high-volume sales, and shortly after its introduction, the boat builder raised €24 million ($23 million) from EQT Ventures, a Swedish venture capital company.

“Following the introduction of the C-8, we had fresh venture capital money, and we sold a lot of boats,” said Mahlberg. “We had learned the pros and cons of certain battery packs while we looked at potential suppliers. We knew Polestar is a Swedish company and that it has great battery packs, and from a marketing perspective a partnership with them made sense – Candela and Polestar have many alignments when it comes to their brands. We’re both rooted in a style of Scandinavian minimalism, and we share a lot of common values for the environment.

“We reached out to them and asked if they would be interested in supplying battery packs to us. Beyond cars, Polestar has a bigger mission to electrify society, and they said ‘yes.’ Now, instead of making our own battery packs and spending huge amounts of money on that development work, we can buy state-of-the-art battery packs from Polestar and we can focus on what we know best.”

The newest vessels have been designed specifically for the Polestar lithium-ion battery pack – by far the boat’s heaviest component – to ensure structural integrity and overall performance. Much of that development work was performed in house by Candela’s 50-person strong engineering team. 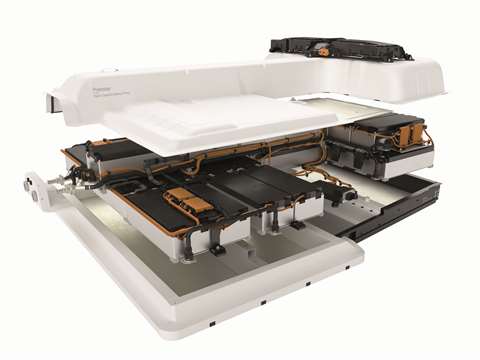 Candela will source lithium-ion batteries from Polestar, a luxury car brand with roots in Sweden and China. (Photo: Candela)

Polestar is headquartered in Gothenburg, Sweden, and sells its vehicles in North America, Europe, Asia Pacific and China. It reportedly delivered around 30,400 cars during the first nine months of 2022 – well on its way to a total production goal of 50,000 cars in 2022. The latest model range, Polestar 2, includes three variants with a combination of long- and standard-range batteries as large as 78 kWh, and dual- and single-motor powertrains with as much as 476 hp and 502 lb.-ft. of torque. Polestar said it plans to launch one new electric vehicle model per year, starting with the Polestar 3 electric performance SUV that debuted in October.

“I am fascinated by the way Candela’s boats glide elegantly and efficiently through, or better, over the water – amazing proof of the great aesthetics and experiences modern, sustainable technology can create,” said Polestar CEO Thomas Ingenlath. “That Polestar will be part of future projects with Candela by supplying an essential part for the innovative propulsion of their boats is awesome. As a battery supplier to Candela, we can help drive the transition to cleaner oceans and lakes and electrify waterborne transport.”

Polestar has said the backing provided by Volvo and Geely has given it the “agility of a startup with the stability of established players.”

Hydrofoiling on the archipelago

Candela boats are built in Stockholm, a city situated on an archipelago along Sweden’s eastern coastline. Assembly is currently done in the company’s own factory on the island of Lidingö, where the carbon fiber hull and deck are also made. A new factory is in the works.

Candela’s first test drive center in the United States recently opened in Sausalito, Calif. The location joined centers in Stockholm, Switzerland, The Netherlands and Italy. The company has said most of its customers for the C-8 have been from the U.S.

The Candela C-8 leisure boat has room for eight passengers, a range of 50 nautical miles at 22 knots and a top speed of 30 knots. 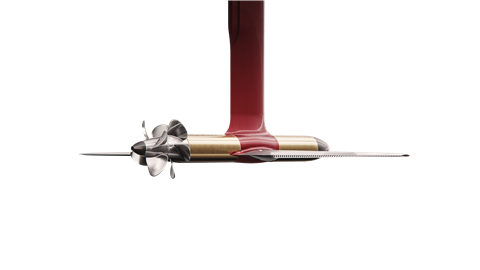 According to Candela, the C-Pod is the first electric marine pod drive with counter-rotating propellers. (Photo: Candela)

By flying above the water’s surface, the company said its boats use up to 80% less energy than conventional vessels of the same size, thanks to the reduction of water friction. The computer-actuated hydrofoils are regulated more than 100 times per second, aided by sensors and computers to ensure a smooth ride in different weather conditions. The company said the process also gives the boats better seakeeping, zero wake and a silent ride. The hydrofoils can be retracted in shallow water or for trailering. When moored, the hydrofoils retract into a hull recess to prevent marine growth.

“Once you go hydrofoiling, it’s pretty hard to go back,” said Mahlberg. “The feedback we’ve received from our leisure customers has been great. The foils get rid of the noise, get rid of the boat slamming against the water – it gets rid of everything that’s a hassle with a conventional power boat. Ultimately, however, pulling the boat out of the water was our key to getting such a long range at high speed when using batteries. Our range is twice that of a conventional power boat even though they have three times the battery size we have.”

The batteries send energy to the boat’s C-Pod, submerged, direct-drive electric motors which the company said were designed to provide a silent ride while eliminating transmission losses. It has a service interval of 3000 hours.

“It’s the first electric marine pod drive with counter-rotating propellers,” said Mahlberg, “and placing the motors under the water eliminated the need for a cooling system because the flow of water would cool the motors. There’s no need to have an oil lubrication system either because there are no transmissions. The motors we’re using are 10.5 cm in diameter, but they have an output of 80 kW, so it’s very, very efficient for its size.”

The C-Pod and the overall design of Candela’s flying boats are scalable, which bodes well as the company is already looking to apply its technology to products for the commercial marine sector.

This past summer, Candela released the first pictures of the P-12 Shuttle (see photo at top). The 40 ft. long, 30-passenger electric vessel is expected to have a speed of 30 knots. Similar in design to the C-8 leisure boat, three carbon fiber wings extend from under the carbon fiber hull to lift the ship out of the water and reduce drag. Using the equivalent of 0.1 kWh of electricity per passenger kilometer, the ship is more energy efficient than a hybrid electric bus, the company said. Also, with up to 200 kW dc charging, it can charge its battery in under one hour. The vessel is expected to be equipped with 180 kWh of Polestar lithium-ion batteries.

The Candela P-12 Shuttle will be used to shorten the commute between the rapidly growing suburb of Ekerö and the Stockholm city center in 2023. Currently a 55-minute trip by bus, subway or conventional ferry, the new shuttle is expected to cover the 15 km route in 25 minutes.

In addition to reducing the time spent commuting, the company said the ferry’s design could elevate the passenger experience to an entirely new level, thanks to the advanced computer system. Those prone to seasickness will appreciate the smooth ride in adverse weather, while the vessel’s Flight Controller ensures a steady ride over waves that would make many feel a bit queasy. 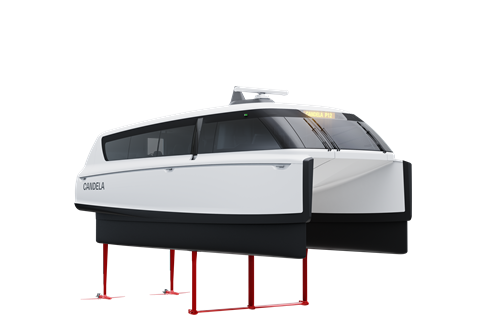 The Candela P-8 was developed to work as water taxis in cities such as Venice, Italy. (Photo: Candela)

Hydrofoiling on the canals

The boat builder also announced the C-8 based P-8 Voyager, which is designed to carry six passengers and two crew members. The company said it is designed to replace fleets of smaller combustion engine passenger craft – such as yacht tenders, taxis and rigid inflatable boats. With an exterior designed in Italy, the P-8 Voyager electric taxi was first announced at Salone Nautico, a boat show held in Venice, Italy, in May.

In the historic city, wakes from water taxis and leisure craft have caused destruction to the wooden pillars that its structures and houses are built on, a phenomenon called “moto ondoso” (wave action). Candela said that its vessels, flying at 30 knots, create waves no higher than those created by the traditional Venetian gondola. 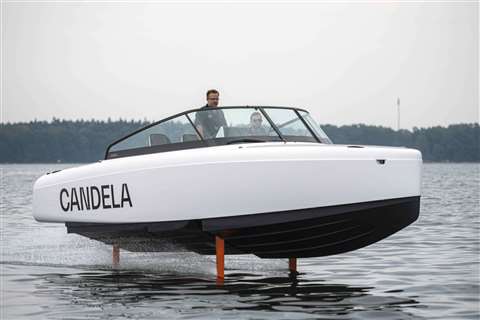 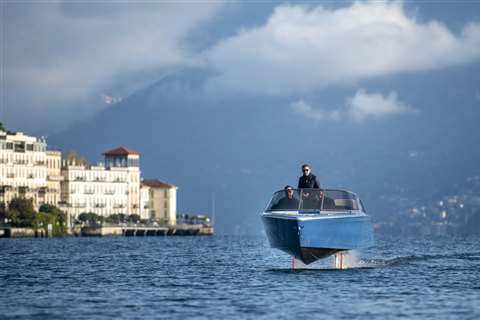 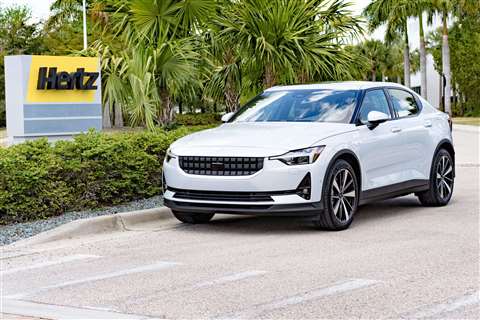