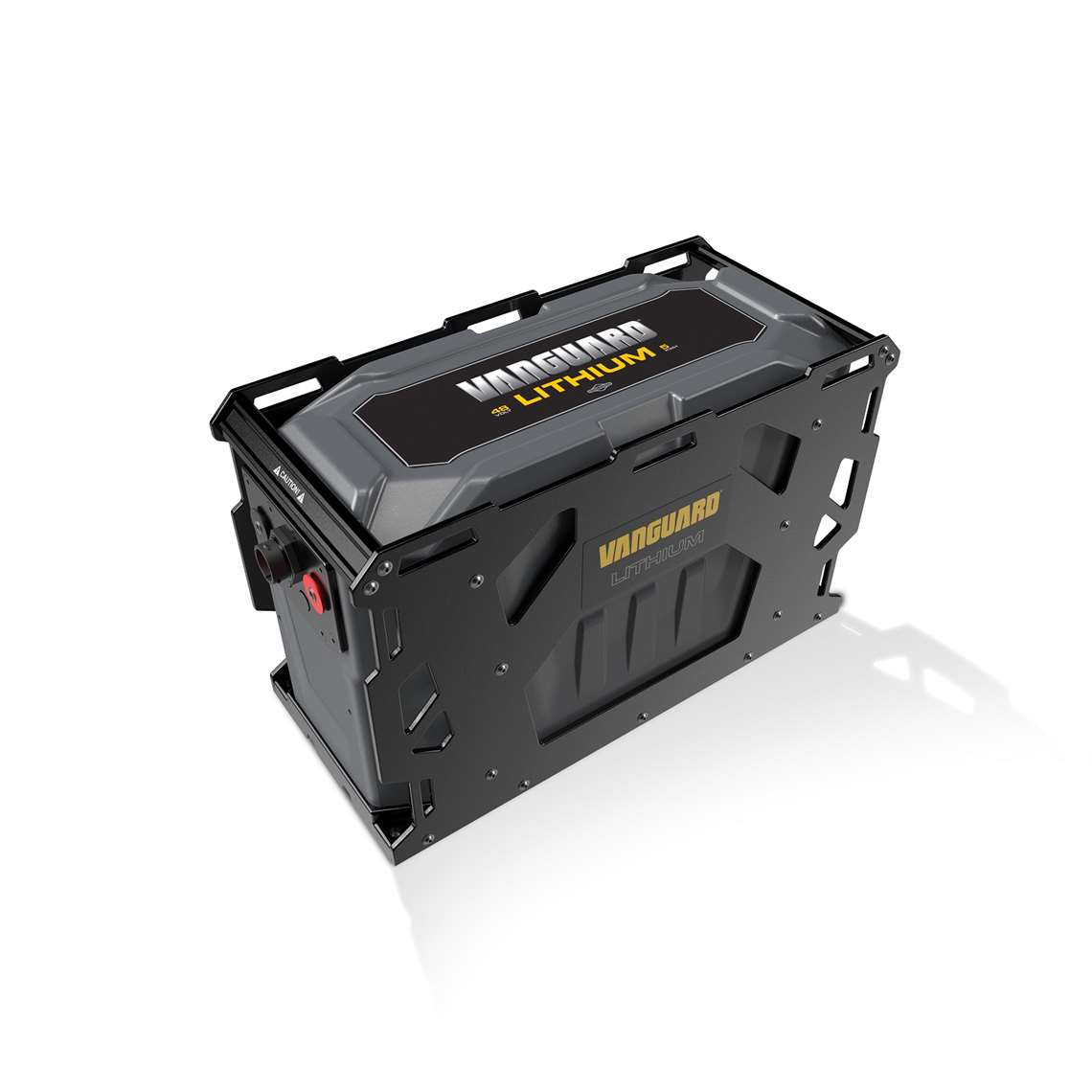 As one of the world’s largest suppliers of air-cooled engines for commercial and consumer applications, it would be understandable if Briggs & Stratton looked at electrification with something less than enthusiasm.

But as part of its determination to evolve the company from an engine manufacturer to a power application company, Briggs & Stratton is taking one of the most significant product development moves in its 110-year history with the launch of a line of commercial Lithium-ion battery packs designed for a broad range of equipment applications.

The first units, rated 5 kWh and 48V, will be unveiled at GIE+Expo in Louisville, Ky., this month, with a 10 kWh 48V unit to debut early next year.

Lithium-ion batteries have existed since the 1980s and they are generally the foundation of most electrified machine systems that are being developed and launched today. Yet as the company examined the market, it realized there was a gap in product offerings that could lead to opportunities, according to Dave Schulenberg, product manager, Alternative Power at Briggs & Stratton.

“We talk about the size of batteries in kilowatt hours, but it essentially comes down to the capacity of the battery,” said Schulenberg. “On the small end, you’ve got power tools, followed by the walk-behind and handheld products. On the other end, you see the EV (electric vehicle) and hybrids.

“But in the middle, there’s this giant market of unserved – I won’t even say underserved, it’s unserved – products. We see that as the half-kWh up to the 20 kWh size. That’s the blue ocean of opportunity.

“If you look at all the products in those areas that are unserved by lithium, there’s two things you notice. One is that products there today are mostly lead acid batteries. Two, all those products are within the power range of existing engines we make. There’s great alignment there and nobody serves these markets except for lead acid.”

But the company’s research also determined that for Briggs & Stratton to become a significant player in batteries, it could not just offer a range of standard, off-the-shelf batteries.

“Once we determined that we wanted to make batteries, the question became, what kind of battery do we want to make?” Schulenberg said. “Typically, you want to start with the biggest opportunity. Unfortunately, there’s not a lot of good data out there, so we surveyed the market and we looked at the number of machines and their capacity and voltage and realized they are all over the map.

“We also started talking to some lead acid customers, asking them ‘what do you want?’ One said they wanted 48 V, 5 kWh and it had to be in a small cube shape with four batteries that could be connected in parallel. Then, a lift manufacturer wants two batteries from 1.2 to 3.6 kWh, either 24 or 36 V and they want the most pancake shape design available. Next a commercial turf manufacturer is interested in a 48 V, 7.2 kWh tall, cube shape.

“We talked to three customers and got three separate requirements. None of them can afford to adapt their machine to a one–size–fits–all battery pack. And if we give them more battery than they need, it’s really expensive.”

Schulenberg said that after doing the research, “we realized that if we started by designing any one fixed size battery, no matter what the size, we knew we would be wrong because each customer has very unique needs. Any one size or voltage battery would only work for the exact customer it was designed for and wouldn’t help the next customer causing us to redesign the entire battery each and every time. ”

To achieve the needed level of versatility, Briggs & Stratton based its batteries on a modular design concept using Lithium-ion cells sourced from major suppliers including Murata, SDI and LG. The cells are packaged in a Cell Module Assembly (CMA) that is engineered for each application.

“The Lithium–ion batteries we’re using are a small cylindrical cell that looks like a “C” cell battery,” said Schulenberg. “You build them into a brick – that’s the CMA – and you can take these CMAs and stack them together in different ways.

“If we string them together in a line, essentially putting them in series, we can do any voltage. As we place them side by side or in parallel, capacity increases. Since lithium per increment is very expensive, it is even more important that we work with companies to help them figure out their actual energy usage requirements so we can build them the exact size of battery they need.

“That’s the economics of this type of power versus an engine,” added Jeff Coad, vice president Global Marketing and Product Management. “With an engine, everybody looks at it and says, well for a few more bucks I can get 40 hp instead of 37 hp. But nobody wants to pay for 3 kWh more if they don’t have to because of the cost of lithium. You have to know what you need and only buy that.”

The other significant advantage to the CMA design, Schulenberg added, is that it allows for the batteries to be serviced.

“Imagine you’ve just spent a lot of money on a battery and you get out in the field and something goes wrong,” he said. “One of those little cells burns out or does something unexpected. In other batteries, everything is bonded together permanently. Our battery is serviceable at the CMA level, so we can take out the Lego brick with the problem and replace it with a new one. That’s a huge service advantage.”

The 5 kWh and 10 kWh are designed to deliver long service life, up to 2000 hours or cycles. “After 2000 cycles, it’s not dead,” said Schulenberg. “The industry standard sets the cycle life for batteries and it’s the number of cycles until the battery has 80% of its original capacity.

For example, the 5 kWh battery we are launching now will still have 4 kWh of usable capacity after 2000 cycles. That’s still a very healthy battery they can use for a very long time.”

The Vanguard Lithium Battery includes a custom built Battery Management System (BMS) and charger. The brains of the system, the BMS, controls the performance of the battery and is paired with the charger to deliver customizable performance depending on the application.

Along with the first 5 kWh battery, Vanguard will be launching a Vanguard Vehicle Controller. The Vanguard Vehicle Controller is tuned to operate the functions of motors or other electrical components as required for the application and provide diagnostics capability through CAN J1939 and CAN 2.0 communications protocols.  As many as three controllers can be integrated into a single 13.5 in. x 10.3 in. x 4.5 in. cast aluminum module that is also IP 66 rated.

“The Vanguard Vehicle Controller is the device that will really define the behavior of the system,” said Schulenberg. “To replicate the behavior that the customers are used to in their machines, you need very sophisticated capability in the hardware, and application experts that know how to get the most out of that hardware because it’s a really hard thing to do. Trying to replicate the behavior of a zero-turn mower, for example, is much more difficult than it would seem. But the application of power is one of our strengths. We’ve done it with engines for years and we’re benefitting from that experience here.”

As part of the specification process for customers, engineers at Briggs & Stratton’s Power Application Center (PAC) analyze how machines are actually used in the application and size and configure the batteries to provide the required power to do the job, but no more.

“If you ask anybody, ‘how long do you need it to run?’ it’s always “eight hours a day.’ When we ask what’s your duty cycle, nobody really knows because nobody paid attention to that before.“

“Run time is a misnomer because very few people actually operate anything for a full eight-hour shift. So instead of talking run time, our message has changed to, ‘it has enough battery to work all day.’”

The Vanguard Vehicle Controller and charger both utilize sealed cast aluminum housings that are designed to protect the internal electronics and keep them cool. “All the connections are internal, which saves a lot of external wiring and trouble for the OEM, making for a much cleaner and more durable solution,” Schulenberg said.

“Another reason for the diecast enclosures is that one of the key points of a motor controller is managing the heat. You’re sending the power required to do all of the work of the vehicle through the controller and when you put that much power through anything it generates heat. The trick to making a high performance and long lasting controller is to keep it cool.  That’s where Briggs and Stratton’s expertise in air–cooled engines comes in. We’ve used that same knowledge to design the aluminum fins on the enclosure to maximize cooling of the internal components.”

Each battery charger can deliver 1050 W of charging power from either a 110 or 230 V source. The standard charging time for the 5 kWh battery is six hours and 12 hours for the 10 kWh battery. The chargers can also be configured in a fast charge mode to reduce the charge time to two hours for both the 5kWh and 10kWh batteries.

Initial production of the Vanguard batteries is taking place at an assembly facility within Briggs & Stratton’s Milwaukee, Wis., headquarters Nicknamed the “IonWorks,” the highly-automated, ISO clean room level site incorporates automated assembly and bonding processes and can assemble and test 5000 battery packs per year per line.

“As we look at Europe and the rest of the world, we have the ability to replicate this type of manufacturing facility which will allow us to be closer to the customer, improve speed to market and not face large shipping costs.”  said Coad.