Blue Star On The Rise 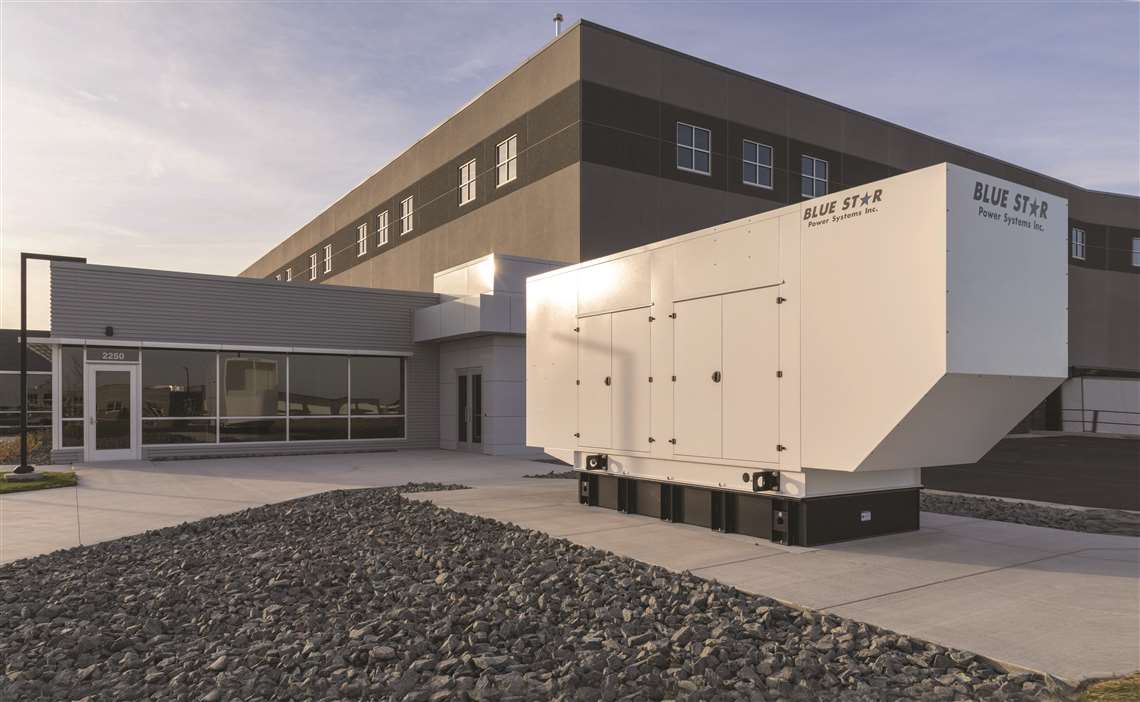 It’s a sad fact that about 20% of businesses fail in their first year and half don’t make it five years. And in a competitive market like power generation, where smaller generator set manufacturers go toe-to-toe with global goliaths, the survival rates are probably even smaller.

Which makes what Blue Star Power Systems, Inc. has accomplished in its 15 years of existence all the more remarkable.

Starting as a job shop in Lake Crystal, Minn., focused on reconditioning power system products, the company has grown into a full line manufacturer of standard and custom industrial generator sets from 20 kW to 2.0 MW, sold throughout North America.

Privately held, Blue Star has increased its revenue every year since its founding, company management said. And the tangible proof is an advanced new manufacturing facility it opened late last year in North Mankato, Minn., about 15 miles northeast of the previous location.

It’s the largest expansion step Blue Star has made in its history. In 2010, the company moved from its original 5000 sq. ft. site to a 45,000 ft. site in in Lake Crystal. But rather than another step up, the North Mankato facility, which counting land and construction was a $13 million investment, represents more of a quantum leap.

“We wanted to build a facility that would rival that of any of our competitors,” said Doug Fahrforth, chief financial officer, co-owner and founder of Blue Star. “A lot of them have multiple facilities, but we wanted one that would rival any of theirs and we feel like we’ve accomplished that.”

The new facility covers 85,000 sq. ft. on 13 acres, with about 68,000 sq. ft. dedicated to generator set manufacturing. While the Lake Crystal building was 45,000 sq. ft., “but only about 30,000 sq. ft. of that was actually usable,” Fahrforth said. “It also wasn’t really set up to be a manufacturing facility whereas this one was set up to specifically do what we do, build gen-sets”.

Blue Star manufactures a gen-set line covering 20 kW to 2.0 MW in diesel, driven by Perkins, John Deere, Volvo and Mitsubishi engines, and 20 to 1050 kW in gaseous fuel, utilizing primarily PSI engines. The engines drive Marathon alternators with Basler and other controls and ASCO transfer switches. The company also fabricates its own skids, tanks and enclosures, with all of the enclosures wind-rated to 200 mph and all of the current product line UL and CSA listed.

While the majority of Blue Star’s sales are standard gen-sets, it’s customized units that the company sees as a significant differentiator.

“But our distributors like to do business with us because let’s say they sell 20 units a year. Maybe 17 or 18 of them are standard units, but then they have two highly specialized projects they’re working on. They don’t have to go somewhere else for that. They can stay and buy them from us and that’s a big deal for them.”

The ability to develop custom gen-set systems has led to growth, particularly in Canada, according to Sales Manager Scott Johnson. “The product up there is really taken seriously, and they put a lot of thought into in it,” Johnson said. “The options they customize with are just amazing – snow-proof enclosures, extra batteries, specialized heaters, multiple circuit breakers, etc.

“A lot of the bigger companies aren’t interested in doing that kind of customization, but that’s really where we thrive.”

Along with the gen-sets and accessories, Blue Star has also developed a significant aftermarket business, Fahrforth said.

“We’ve been building our parts business – we call it ‘components’ – and it’s been pretty successful for us,” Fahrforth said. “We also just launched a website for purchasing components from us. So now our distributors can go online and have a shopping cart, almost like an Amazon.

“That kind of plays into our trying to make it as easy as possible for people to do business with us.”

The philosophy of making it easier to do business was particularly important as it relates to Blue Star’s distributors. At a time when many segments of the engine-powered equipment industry are seeking alternatives to the classic independent distributor model, Blue Star has essentially doubled down on it, growing its network to 75 in North America, a great many of which are Blue Star-exclusive.

“We are starting to see a lot of people in our industry bypass the distribution method,” Fahrforth said. “They’re going direct to the end user. We don’t have any intent to do that.

“We could go direct and sell a bunch of product quickly and not worry about what happened to it. But is that sustainable for long-term success? I don’t think it is.

“We feel very strongly about the support of our products after the sale and that is challenging for us to do if we don’t have a distributor taking care of that. So we have no intent of changing how we do business.”

Instead, the biggest changes to Blue Star’s business are continuing to occur because of the increased capabilities and efficiencies brought by the new facility.

The company spent seven years in the last building in Lake Crystal before determining that an upgrade was needed. Blue Star purchased the land in North Mankato in 2017. Construction on the building began in the fall of 2018 and all operations were moved into the new facility in late 2019.

“The biggest thing is, we didn’t feel like that building in Lake Crystal represented the type of company we were at that moment and what we were becoming,” said Bruce Prange, Blue Star president, COO and co-owner. “I think at times people would show up at that building and wonder if we were truly going to be able to handle the capacity that they were going to bring to us as a distributor. It was hard to bring an engineer to that building and maybe have them believe this is a real company that’s going to be here for a long time. Whereas when you come here, this changes all of that.”

The North Mankato facility has six production bays, each equipped with overhead cranes, the largest bay having a combined lift capacity of 40 tons.

“Right now, we go up to 2 MW in diesel and 1050 kW in natural gas,” Prange said. “At some point in the future, as the industry continues to trend toward larger units, this gives us the capability to grow as that demand grows.”

In Blue Star’s manufacturing process, each unit is assembled by a team of technicians that follow each unit from beginning to end. “It’s not a true assembly line process, where everybody does one thing and it moves on,” said Prange. “Essentially there are only two or three people that work on a unit and they really know what they’re doing. Also, because of the amount of customizing we sometimes do, they have to know what they’re doing or we’ll have to spend too much time in engineering documenting it.”

Every assembly activity has its own inspection process, after which each gen-set goes through Blue Star’s new $700,000 paint system, where the units are painted with a two-part enamel paint, clear coated and then baked for 30 minutes at 140ºF.

“We’re one of the few in the industry that still completely paints our units,” said Prange. “A lot of people are going away from that, but we still paint every unit.

“Whether it’s sitting indoors or outdoors, if somebody opens the enclosure, what they see is important and first impressions mean a lot. It’s a representation of our company and our brand. It means a lot that it looks good.”

After painting, each gen-set is factory tested to rated load and power factor in one of three production test cells that can test up to 2.25 MW at up to 5kV. An additional, higher capacity test cell is used for product development and customer testing and will be expanded to 4MW at up to 15kV in the near future.

“We only had one test cell in the old building,” said Fahrforth. “If we had an issue with a unit during the test, it held up production. If we had a customer-witnessed test, production stopped.

“Here if we have an issue or a customer witnessed test, we can set them up in one cell and production continues on.”

“We have a lot more opportunities to do a lot more testing,” Kirtz said. “In the old building, we had to do special testing after hours or on weekends because we didn’t want to shut production down. Now we have the ability to grab a test cell and we can be in there doing what we need to do without disruption.”

Along with the manufacturing and engineering advantages, the new site has yielded benefits in terms of attracting and retaining a quality workforce. Having grown to more than 100 people now, the employees benefit from new amenities such as a walking trail that connects with a municipal trail, a fitness center and spacious lunch, meeting and training rooms.

“The workforce is pretty ag-driven up here and ag has done fairly well over the last decade,” Fahrforth said. “So it’s pretty challenging to find good workers.

“That’s a big part of why we were so focused on making it a good place to work when we built this facility. I want them to be able to bring their families here and say, this is where I work and I had a hand in building this place – because they did. We wouldn’t be where we are if it wasn’t for the great people we have in this building.

“Whether it’s an employee, a potential distributor, an existing distributor bringing a potential customer, we wanted that “wow” factor when people come here. And I think we’ve achieved that.”