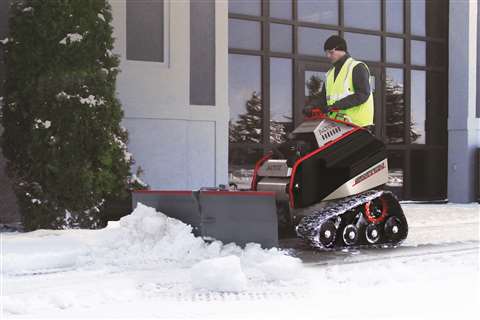 In just over a decade, Altoz has made its name as a supplier of commercial and consumer wheeled and tracked machines for turf management. Now, the company is making a switch to broaden its horizons beyond mowing and grounds management when the landscape is green.

The new Altoz Switch is a tracked, stand-on multipurpose tool carrier engineered for landscape and snow removal professionals, city utility departments and municipalities, and designed to work all year long.

“It isn’t a departure – with three different options from mowing or brush cutting – in making tall grass short or having the ability to reclaim overgrown land,” said Karl Bjorkman, sales and marketing director at the Minnesota-based company. “But it is a departure in that it’s got much more of a multi-season purpose. You’ll be able to plug and play various attachments and we’re going to expand on that going forward.”

The Altoz Switch relies on much of the same technology and components that are used in the company’s mower lines. The machine is powered by a Kawasaki FX air-cooled V-twin gasoline engine rated 29.5 hp at 3600 rpm. The engine incorporates Kawasaki’s multiport electronic fuel injection system and includes a top-mounted two-stage air cleaner.

The engine drives Hydro-Gear PR-series pumps that power Parker TF-series sprocket motors that operate each of the 9 in. molded rubber composite tracks separately to deliver zero-turn maneuverability and a maximum forward speed of 6 mph.

Other standard features on the Switch include an electric dial throttle control, a 9 gal., side-mounted fuel tank, a solid-state PTO switch, keyless push-to-start ignition and SmarTrac and SoftStart clutch control that is designed to reduce engine speed at clutch engagement to decrease mechanical wear and increase belt life.

The versatility of the Switch is enabled in part by its compact size (55 in. long x 42 in. wide x 52 in. high) and the operator’s standing position. “For winter applications, when you’re standing as you’re snowblowing or brooming, it allows you to get into tighter areas and gives you 360º visibility,” Bjorkman said. “Whereas if you’re sitting on a tracked machine like a skid-steer loader, you can’t see 360º around you. And you can’t turn as tight.”

Versatility is also reflected by the machine’s broad range of attachments, which currently include:

“As we’re introducing it, we picked what we understand to be the best-selling attachments,” said Bjorkman. “A broom is the best-selling attachment for this type of vehicle and you can use that in the spring, fall or winter, whether it’s snow or debris. We also know that a blade is the second strongest attachment that people can use to push dirt or light aggregate, either with the straight blade or the V-blade. We also want our dealers to have a product they can sell in the wintertime, so the snowblower, broom and blade accessories all offer them a year-round business.

“As we move south of the snow belt, we’re going to look at different attachments, whether it be stump grinders, trenchers, rototillers – whatever the market leads us toward, we’ll explore it and be able to design and develop it in-house.”

Altoz has begun limited production of the Switch at its 300,000 sq. ft. Greenbush, Minn., manufacturing facilities. Full production is scheduled for late summer of 2023. 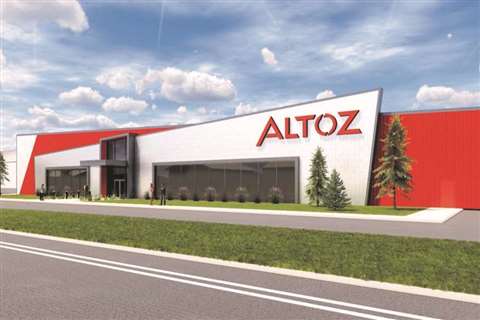