All Eyes On MEE As ConExpo Nears

As the final trade show before ConExpo-Con/Agg & IFPE, Middle East Energy in Dubai was under scrutiny when it started today (March 3) by a business world part-paralysed by the threat of the COVID-19 virus. Diesel Progress International’s Editor Ian Cameron reports from Dubai.

As some companies worldwide re-examine their show attendance given the potential health dangers of the virus there was particular interest in show visitor numbers on Day 1 in Dubai at MEE where Diesel Progress also has a booth (S2.F15).

Yes, it was the first day of the event, claimed to be the Middle-East’s largest power exhibition, so it was bound to be a slow burner. That’s fairly typical of trade shows.

But there is no doubt that the 45th edition of MEE, previously known as Middle East Electricity, felt quieter than normal. And not just the show itself. The restaurants and bars around the venue are eerily quiet whilst tourist numbers in general to Dubai seem sluggish.

“There are more hotels than tourists in town at the moment”, one waiter observed the evening before MEE.

Unfortunately some companies did cancel their attendance at MEE not least French diesel engine builder Moteurs Baudouin which pulled out and issued a strongly worded statement in which it said it told MEE’s organizers that it is the wrong time to hold a worldwide gathering given the health scares. Globally, other trade shows have recently been cancelled or postponed.

Some exhibitors have sent fewer non-local staff to MEE although there are still many senior, decision-making staff at the event and there remains something of a buzz at the show especially as the region is undergoing an energy transformation and an increased focus on energy security among many governments.

The question on exhibitors’ lips at MEE concerned ConExpo and how visitor numbers to the Las Vegas event would work out given COVID-19.

Well, according to ConExpo’s organiser, in a recent statement, more than 4000 new registrations to attend were made the week of February 24. Advance registration is said to be well ahead of the 2017 show with a projected attendance of more than 130,000 people and 2500 exhibitors.

ConExpo organisers said they are also doing everything necessary to ease any health fears including the increased deployment of hand sanitizer stations across the show floor, grounds and meeting rooms and an increased cleaning schedule of all public areas.

Show management has also arranged for “No handshake” buttons and stickers to be distributed at the show.

Handshakes are a serious issue at MEE. Most people, through habit, do it at a show but it’s usually followed here by “sorry I didn’t mean to do that – here have some sanitizer.” And sanitizers are a big subject at MEE with organisers dropping off bottles on booths and at least one engine builder, Perkins, also giving out bottles for visitors.

In summary the show remains a key event for the power generation sector in the Middle-East and very well-worth attending.

And not everyone was dismayed by the lacklustre numbers on the first day. One visitor appreciated it as it meant he got to spend much more time than normal with his existing and potential customers who were more than happy to chat with him. 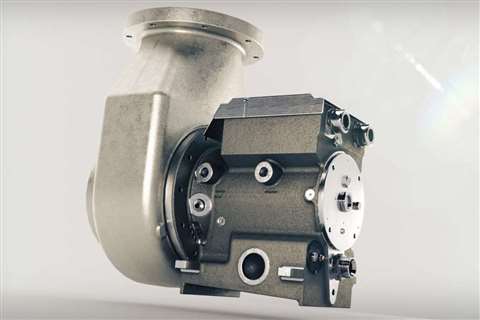