AEM's 90-second video is a key component of the "Faces of Manufacturing" initiative. (Photo: Association of Equipment Manufacturers)

The Association of Equipment Manufacturers (AEM), the North American trade group representing more than 1,000 off-road equipment manufacturers and suppliers, has unveiled “Faces of Manufacturing”, an initiative designed to rally the industry’s 2.8 million workforce in support of pro-manufacturing policies. Its centerpiece is a 90-second video featuring 22 workers urging their peers to encourage elected officials to promote job creation and economic growth in order to keep the equipment manufacturing industry strong.

“Faces of Manufacturing” – which is part of I Make America, AEM’s national grassroots campaign designed to educate and engage workers around issues impacting their jobs, families and communities – launches just as Congress considers the Bipartisan Innovation Act, legislation targeted at boosting domestic research and manufacturing and securing supply chains critical to U.S. national security and the economy. The Act is intended to foster global competitiveness of American industry and labor.

“Fueled by a legacy of grit and ingenuity, America’s equipment manufacturers can outcompete anyone,” said “But when other countries engage in unfair trade and investment practices, we are effectively forced to compete with one hand tied behind our back.

With less than seven months until the midterm elections, the initiative is meant to mobilize the industry to send a message to Congress to “come together in a bipartisan fashion to enhance American competitiveness and empower U.S. workers and companies to succeed in domestic and international markets,” stated Kip Eideberg, AEM’s senior vice president of government and industry relations in the announcement of the initiative’s launch.

The association plans to deploy the video and supportive digital and print materials to manufacturing facilities all across the U.S. 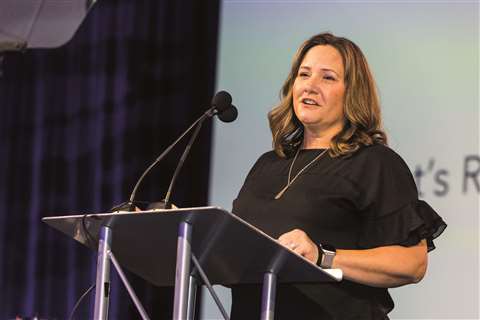