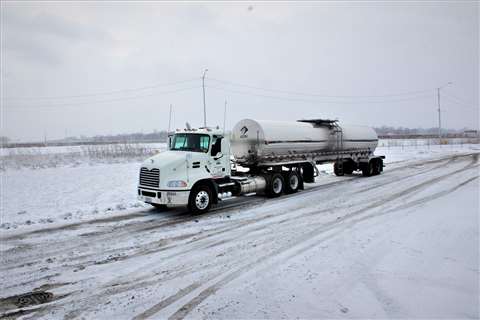 Five trucking running B100 fuel were compared against a control group of five identical trucks that operated on ADM’s conventional diesel fuel, which is an 11% blend of biodiesel (B11). Both groups of trucks ran similar routes over like duty cycles and in the same conditions. Upon review of the data provided by the trial, Optimus said the study confirmed significant environmental and operational benefits of B100 as well as showcasing the Vector system’s ability to unlock these benefits for a new segment of heavy-duty transportation.

While nearly all diesel engine manufacturers support at least 20% biodiesel (B20), the Optimus Vector system is designed to allow conventional diesel engines to run on 100% biodiesel in a wide range of climates. The system is in use in shorter-mileage, local fleet applications such as distribution and waste removal.

The Vector system is an advanced fuel system technology that enables heavy-duty diesel engines to reduce carbon emissions by using 100% biodiesel (B100). Already running on commercial and government fleets from Portland, Ore., to Washington, D.C., Optimus said it reduces carbon emissions in a cost-effective manner. Until recently, however, the technology had yet to be analyzed on large high-mileage over-the-road fleet applications.

The Vector B100 trucks reportedly reduced Scope 1 carbon emissions by over 940 metric tons throughout the trial. Scope 1 emissions are direct GHG (greenhouse gas) emissions that occur from sources that are controlled or owned by an organization and are typically the primary emissions source for companies with fleet operations to consider as they create sustainability and carbon reduction plans.

In addition to decarbonization, The B100 trucks reportedly also saw an increase in fuel economy, a reduction in the ash accumulated in the diesel particulate filter (DPF), an overall reduction in the total number of active DPF regenerations, and improvements in a variety of engine crankcase oil parameters.

Biodiesel feedstocks can include vegetable oils, rendered animal fats, algae oils as well as used cooking oils and greases. ADM produces biodiesel from vegetable oils in the EU, Brazil, Canada and in the U.S.

The company said B100 has been in use for years in a range of municipal fleets such as DC Public Works, the City of Madison, Wisconsin, and the City of Ames, Iowa.

The field trial began February 2020 and was completed June 30, 2021. After lenghty study of the data, Optimus said it will release the findings from the study in a full report that will be made publicly available October 19. The company is also offering pre-release access that will be available starting September 21 by registration via optimustec.com/adm.