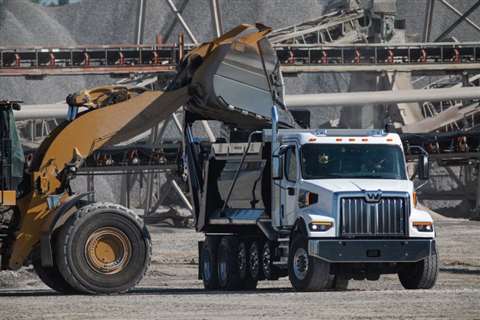 With a shorter hood and a wheel cut up to 50º, the 47X further is designed to maneuverability for work on construction sites or operation in congested urban environments. The truck has a standard 111.6 in. bbc for regions or applications that require a shorter overall vehicle length, such as drywall trucks, while for those that need to meet federal or local bridge law requirements, such as mixers or super dumps, an optional 110.8 in. bbc is also available.

“With the 47X and the 49X, we can offer our vocational customers different options that will give them the right tool for their specific job needs,” said David Carson, senior vice president, sales and marketing, Daimler Trucks North America (DTNA). “The vocational segment is a broad segment, covering many different applications, and our Western Star X-Series reflects that reality. Whether their work be heavy-haul, logging and timber operations, or construction, we have the right Star for our customers.

Detroit DD13 Gen 5 engine
The 47X comes standard with a Detroit DD13 Gen 5 engine, a 12.8 L, inline six-cylinder engine available in ratings of 370 to 525 hp with torques of 1250 to 1850 lb. ft. The engine incorporates a new swirl piston design and higher compression ratios for improved combustion and efficiency, the company said, as well as Detroit’s ThermoCoasting feature in which the engine brake is strategically engaged to prevent aftertreatment cooldown during a driving regeneration. This is designed to keep the aftertreatment at an optimum temperature and significantly reduce the need for parked regenerations. 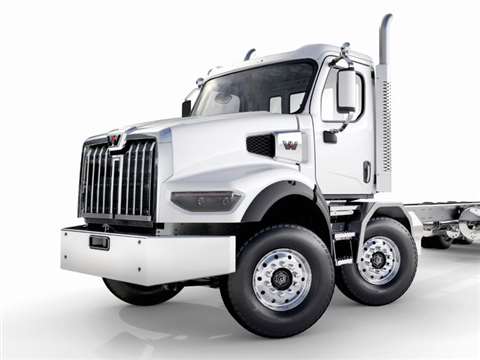 For weight-sensitive applications, the Cummins L9 (260 to 380 hp) and X12 350 to 500 hp) engines are available for the 47X. Optional front-engine power take-off (FEPTO) is offered on both Cummins engine offerings and the Detroit DD13 for applications such as snowplows. Similarly, rectangular fuel tanks and a raised aftertreatment system mounting are offered with Cummins engines for improved clearance for belly plows, making them an option for municipalities and customers maintaining critical roadways in the winter months, Western Star said.

The engine is teamed with an all-new Detroit DT12-V automated manual transmission, which is built on the established DT12 that has more than 35 million miles of vocational-specific testing, the company said. The DT12 includes three work-ready mode applications: Rock-free mode, Off-road mode, and Paver mode for the challenges of specific vocational applications.

Western Star priorities
“A key priority was to consider how to reduce mass without compromising strength,” said Tracy Mack-Askew, chief engineer of chassis, propulsion and vocational engineering, DTNA. “From the cab to the frame rails, to powertrain and battery configurations, we examined all features to deliver weight savings to our customers for greater productivity and profitability.” 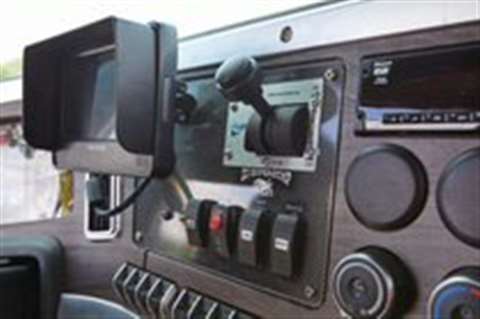 The 47X cab incorporates a flex panel that allows for the integration of a variety of body controls.

The 47X is approximately 200 lb. lighter than the 49X in a like-for-like spec and is best for weight-sensitive applications like mixers and bulk haul, Western Star said. All X-Series trucks single-channel frame rail options designed to offer RBM (resisting bending moment) of up to 3.8 million in. lb. for longer service life and greater payload capacity. A new 9.5 mm single channel rail option is available and features comparable strength as today’s 11 mm rail, the company said. Standard high-strength aluminum forward, rear and end-of-frame crossmembers further reduce mass, as does a new two-battery option.

How comfortable is the X-Series’ cab?
The X-Series steel-reinforced aluminum cab further reduces mass by up to 8% while offering 13% more space than competitors, the company said. An optional two-person bench seat is available for applications demanding a larger crew, and a new in-cab battery box is designed to provide additional legroom to the operator. An optional roof-mounted condenser offers maximum airflow through the radiator for stationary applications like construction and mining while keeping operators comfortable.

All X-Series models come standard with a wrap-around dash that provides easy access to the driver command center and B-panel. On the B-panel, a flex panel can be prepped for a tablet or configured for an additional 12 switches or 10 gauges.

The 47X’s hood offers forward visibility of 24.8 ft. – an 11 in. improvement over the 49X – while its composite construction and ISO Tech suspension system resists bending and cracking by absorbing and dissipating vibrations from road inputs, the company said.

Western Star and other TEMs
Western Star said it partnered with leading truck equipment manufacturers (TEMs) to ensure the X-Series supports fast and efficient upfits. The 47X’s mid-chassis packaging has a number of clear back-of-cab configurations while unobstructed frame rails are engineered to provide more efficient body integration. The QuickFit Interface System offers ready access to electrical architecture and was designed for easy TEM interface, programming and access to power. The Chec Tool from DTNA enables TEMs and dealers to view and modify electrical configurations, giving them the power to customize inputs and outputs and change parameters within minutes.

“With the power of QuickFit and Chec, you can take things that were once considered to be complex, expensive or impossible to do and accomplish them more easily and efficiently,” said Carson.

Western Star said the 47X and 49X are suited to heavy haul and logging operations, along with oilfield, towing & recovery, bulk haul, crane and dump applications.

“With the addition of the 47X to the X-Series line-up, Western Star is offering fresh, modern trucks with purposeful technologies to enable all vocational customer’s success,” Carson said. “The wide breadth of segment coverage means that there’s a Star for every need.”

The 47X is available for order now and delivery to customers begins in early 2022.