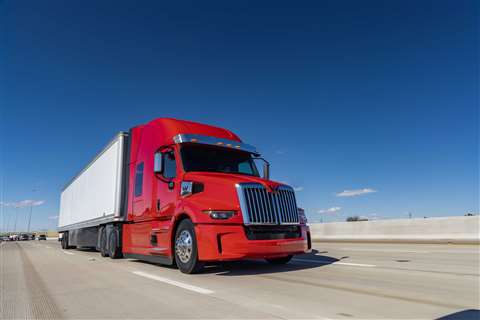 Following closely on the introduction of the 47X work truck last fall, Daimler Truck North America’s (DTNA) vocational truck subsidiary Western Star has further expanded its X-Series lineup with the introduction of the 57X long-haul truck in the U.S. Blinged out with eye-catching chrome and a redesigned front end, the new vehicle isn’t shy on either looks or performance, providing a nearly 6% fuel efficiency improvement over its predecessor, the 5700XE, and several technology firsts for line-haul applications.

“The 57X expands the X-series tool kit to deliver on an on-highway, over-the-road focused tractor born from the same DNA as the vocational 47X and 49X, while engineered to maximize aerodynamics, fuel economy, safety and comfort,” said Alex Lee, on-highway product marketing specialist, DTNA, during a walkaround presentation on the new model.

The 57X was developed specifically for owner-operators and small fleet customers operating long-distance routes. Built on a proven platform, the new unit comes in a set-back axle configuration with a 128.5 in. BBC (bumper to back of cab) and wheelbase up to 361 in.

“The chassis and cab structure have millions of miles of internal and real-world testing underneath their belts,” said Lee. “The chassis shares Daimler’s No. 1 best-selling line-haul chassis in North America, featuring splayed front rails that allowed for a lowered powertrain and cooling package for improved center of gravity and increased stability. [This] also gave way to design a sharper hood angle for improved aerodynamics and visibility.”

Pulling power for the 57X is derived from a choice of Detroit inline six-cylinder diesel engines:

According to Western Star, the DD13 and DD15 incorporate an asymmetric turbocharger, Amplified Common Rail System (ACRS) that optimizes combustion control, and a cooling system with shorter fan-on times to maximize fuel efficiency. Advantages of the DD16 include a wide, flat torque curve that pulls strong down below 1000 rpm, noted the company, as well as turbo compounding to recover heat from the exhaust and transform it into bonus power. 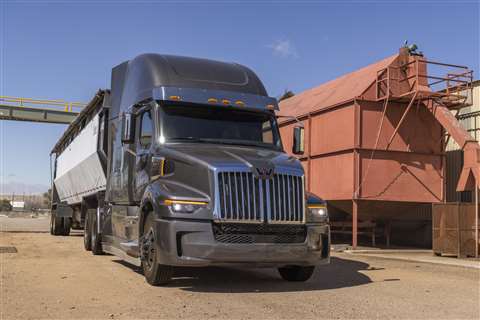 With a Detroit Integrated Powertrain, the all-new 57X is 5.8% more fuel efficient than the 5700XE it replaces. (Photo: Western Star)

While the options available can tailor the 57X to specific preferences or requirements, according to Lee, there are benefits to spec’ing the Detroit engine with the DT12 and Detroit axles, most notably “the ability to maximize performance and fuel economy across any stretch of road.” The Integrated Detroit Powertrain comes with Intelligent Powertrain Management, the next level of predictive technology, which anticipates terrain and adjusts to road conditions to further maximize operational efficiencies. It also includes the Axle Lubrication Management system.

“Combining the efficiencies from the Detroit powertrain, chassis and aero components, the all-new 57X is 5.8% more fuel efficient than the 5700XE it replaces,” Lee added.

As with its X-Series siblings, the 57X comes with the Detroit Assurance suite of safety systems. The built-in safety features are especially critical when traveling long distances and in high traffic or congested areas.

“Aside from helping mitigate collisions and warning you when you start to veer out of the lane, Detroit Assurance will provide you peace of mind and help lower your stress and fatigue levels, especially over long runs,” Lee stated. 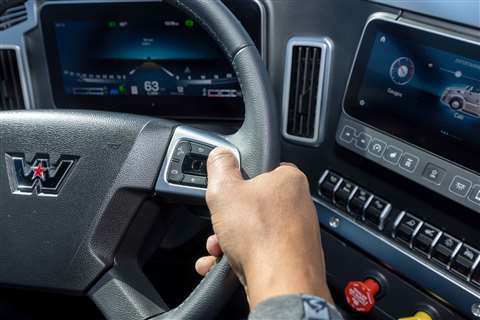 Integrated steering wheel controls let the driver control most functions of the digital display without taking hands off the wheel. (Photo: Western Star)

Detroit Assurance 5.0 Safety System with Active Brake Assist 5 includes the camera/radar “always-on” system, Adaptive Cruise Control and optional Active Lane Assist. “With adaptive cruise control, the system automatically maintains a safe following distance, so you are not caught off guard getting too close to another vehicle or constantly adjusting for traffic,” Lee noted.

“One of the most innovative features of Detroit Assurance is Active Lane Assist,” he continued. “This industry first feature is actually Level 2 autonomous driving. When on the road in cruise, it will help keep you centered in the lane and lower fatigue at the end of the day from constantly chopping at the wheel.”

Another new feature with the 57X is Active Side Guard Assist, which Western Star describes as “an industry-first technology designed to mitigate blind side issues during right-hand turns.” According to Lee, the feature alerts the driver of a collision risk during a right-hand turn if there is an object detected in the driver’s blind spot. It makes changing lanes safer, as well, by warning the driver not to enter an occupied right lane.

As a further safety benefit, the vehicle comes with a WABCO anti-lock braking system (ABC) and optional Hill Start Aid and Traction Control.

The 57X includes the X-Series lightweight, steel-reinforced aluminum cab with Quiet Steel technology and X-Series steel doors. Shorter and longer cab (with sleeper) versions are available in ceiling heights from 60 to 72 in. and in Base or Premium trim levels. Improved insulation and easy to use ventilation and temperature controls enhance operator comfort, said Western Star, with numerous additional comfort features and options available to further customize the truck to driver needs. 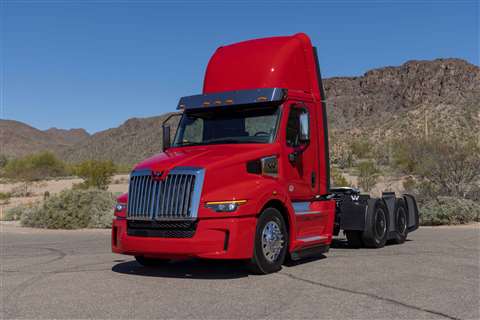 Production of the 57X is scheduled to begin in the first quarter of 2023 at DTNA’s production plant in Cleveland, Ohio. (Photo: Western Star)

Adding to the vehicle’s “firsts” is a high-definition digital dash with 12-in. main instrument display and 10-in. auxiliary display with Apple Carplay, Android Auto and SiriusXM. Built into the wraparound driver’s cockpit, the digital dash enables instrument configuration and simplifies control of entertainment functions and vehicle information.

“The digital dash display offers large, easy to read screens that are controlled via the steering wheel’s optical finger navigation and buttons,” said Lee. “This display offers numerous gauges and maintenance options, and is where our Detroit Assurance readout, options and warnings will appear.” Integrated steering wheel controls let the driver control most functions without taking hands off the wheel.

To optimize visibility on the road, a 28% larger, one-piece, wraparound windshield is combined with an impact-resistant yet lightweight molded resin hood with high-visibility design and LED headlights with dual-stage intelligent heated option. Optimizations to the chassis and cab – including the aerodynamic hood, air ducts in the bumper and flexible skirts between the cab and chassis – reduce fuel consumption further, a critical factor in ROI for line-haul applications.

Production of the 57X is scheduled to begin in the first quarter of 2023 at DTNA’s production plant in Cleveland, Ohio. 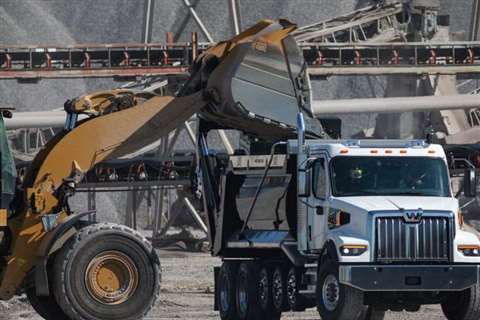 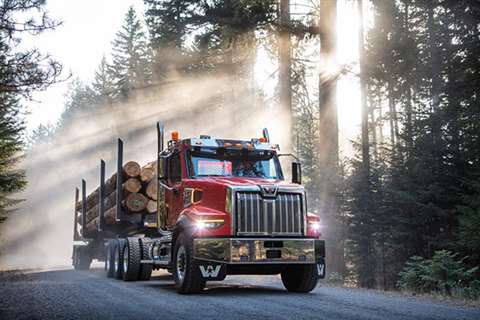 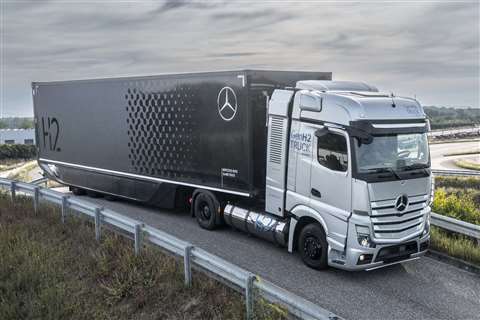