Vanguard-powered UAVs bring aid from above 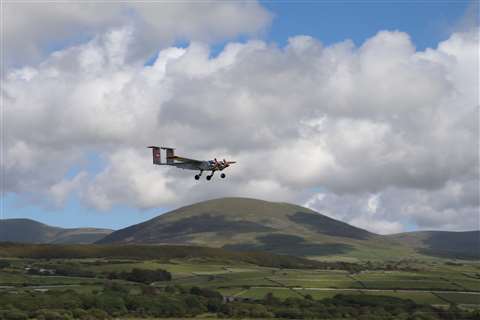 The Windracers Ultra UAV is designed to carry 220 lb. of cargo up to 621 miles.

To date, the most reliable and inexpensive means for delivering food or medical aid into remote areas is a truck. But a new organization that specializes in unmanned aerial vehicles, is aiming to change that.

Based, in the U.K., Windracers is a privately funded not-for-profit organization focused on providing transportation services to the humanitarian aid, research and environmental protection communities. Working with a research team from the Faculty of Engineering and the Environment’s Computational Engineering and Design Group at University of Southampton, it has developed a specialized drone, the Windracers Ultra unmanned aerial vehicle (UAV). Powered by a pair of Briggs & Stratton Vanguard air-cooled gasoline engines, the remote-controlled drone is engineered to reliably deliver food and medical supplies to remote areas.

“We realized we could use emerging UAV technologies to help solve several key world issues, starting with medical and food aid distribution,” said Charles Scales, CEO and co-founder of Windracers. 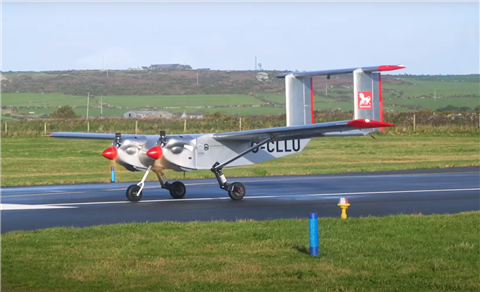 Scales and Windracers co-founder Stephen Wright, looked at the international aid landscape and saw that due to poor ground infrastructure, weather and topography challenges, it often takes up to six months for aids to reach recipients in countries such as South Sudan. “Sadly, millions of people in the UN World Food Program emergency zones require food aid,” Scales said. “And up to six-month delivery times are, this day and age unacceptable. UAV technologies can play a real part in closing that gap.

“UAVs allow you to distribute rapidly across a wide geographic area direct to villages, which a truck or large aircraft couldn’t manage. It’s direct, it’s diverse and it’s an extremely rapid and flexible way to approach aid distribution.”

Designed to carry 220 lb. of cargo up to 621 miles (100 kg up to 1000 km), the Ultra UAV is designed to be inexpensive, robust and reliable. “There’s nothing else like it,” said Scales. “We used aluminum for the body, which is highly recyclable, relatively inexpensive and robust. It’s smartly built so we can deliver aid at an economic price point — and one day, be cheaper than a truck.” 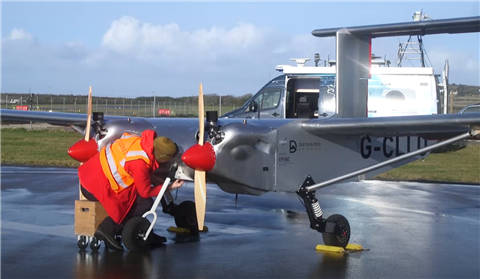 The Vanguard engines used in the Windracers Ultra UAV are air-cooled, 627 cc V-twin engines rated 23 hp gross. They were slightly modified to save weight and drive the propellers from the flywheel rather than the crankshaft.

Determining the power source was the first step the design process, which began when the company was formed in 2017. “There’s no guide to creating a UAV like this, so we started with the engine,” Scales said. “Everything revolves around the power solution.”

With weight and output the key considerations, Windracers chose the air-cooled Vanguard engines. Equipped with electronic fuel injection, the engines are horizontal shaft, V-twin engines with bore and stroke dimensions of 75.4 x 70.1 mm and a total displacement of 627 cc. Each are rated 23 hp (gross) at 3600 rpm.

The engines, which drive the two-blade propellers off their flywheels rather than the crankshaft, were modified slightly to save weight. The blower housing and recoil assembly were removed, a different air filter assembly was added and the air ducting was changed.

“The engines are highly advanced,” said Scales. “They’re tough, they do the job, and they fit within our aviation weight constraints. It’s an engine that’s been proven in commercial applications. More importantly, the service intervals are much longer than most UAV aviation engines, so we know we can rely on them.”

Another key aspect was Briggs & Stratton’s global parts and service network, which gave the Windracers team confidence that parts and support would be available even in remote areas.

By spec’ing two engines on the drone, Windracers added a measure of insurance. In the event one engine has an issue, the mission can be aborted and the Ultra UAV can return to its point of origin on one engine, eliminating the danger of lost aid or a lost UAV. “The horsepower available between the two engines is absolutely critical,” Scales said.

The Windracers team worked with the Briggs & Stratton Power Application Centre Europe (PACE), led by Gerhard Ihrig along with a team at the U.S. Power Application Center in Milwaukee, Wis., led by Engine Application Specialist - International Ron Weber. “We have a great relationship, said Scales. “We ask questions and Briggs answers them with a solution quickly. It’s exactly the partnership we need at this stage in our development.”

This story first appeared in the June issue of Diesel Progress. For a free print or digital subscription, click here.