An SCR fitting for all seasons 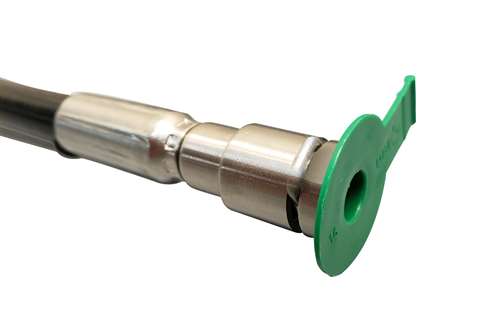 In the decade since selective catalytic reduction (SCR) aftertreatment began making its way into the on- and off-highway diesel engine marketplace, diesel exhaust fluid (DEF) has become ubiquitous. But it remains unique among the many fluids used in vehicles and machines for one unfortunate reason – it easy freezes when the temperature drops below 12°F (-11 º C).

Further complicating matters, DEF is a water-based solution consisting of 32.5% aqueous urea and 67.5% water, that can expand as much as 7% when frozen. This can result in significant problems for DEF delivery systems and particularly the fittings that conduct the fluid between tanks and injection components.

“To protect the fluid connectors at key-off, there are two prevailing strategies,” said Ty Henry, senior engineer at Parker Hannifin. “The first is to return the DEF remaining in the lines back to the tank during a purge cycle. The other method is to use components that can absorb the additional volume by expanding.

“Hose assemblies and their connectors for these “non-purge” systems have more challenging requirements than those used in typical low-pressure applications.” 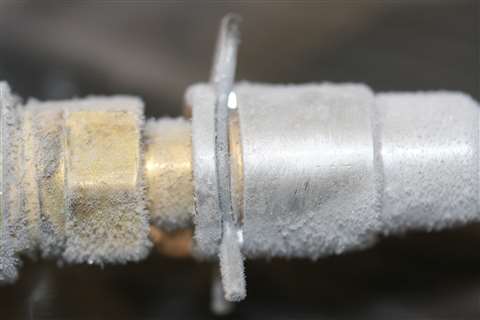 A Parflex J2044 fitting undergoing a hard freeze test. The fitting’s stainless steel construction enables it to withstand both freezing cold and the high temperatures that can result from close proximity to engine and exhaust components, the company said.

Many commercial fittings incorporate a thermoplastic construction, using either glass-filled polyamide 12 or polyphalamide (PPA) and both are compatible with DEF and maintain strength at high temperatures. Since regulations in the U.S. and Europe require that DEF injection systems be heated, resistance-heated wires are typically added to the exterior of the fitting.

But while thermoplastic fittings are simple and versatile, there are limitations, Henry said. “Non-purge hose assemblies rely on the hose and mating components to absorb the DEF expansion should the system freeze when the engine is shut down,” he said. “The fittings themselves do not have any inherent freeze protection beyond the minimum tensile strength as required by the SAE J2044 standard.

“In some cases, dynamic conditions can reduce the effectiveness of the hose assemblies to protect the fittings. In others, the fittings can be forced to protect against additional volume as components freeze at different rates. In that environment, even designs that exceed the SAE minimums can be subject to tensile failure.”

Henry also noted that when continuously exposed to temperatures exceeding (130°C) – hardly an unlikely occurrence with DEF systems often positioned in proximity to hot engines and exhaust systems, especially in off-highway equipment – thermoplastic materials can degrade and fittings nearest the exhaust components can become brittle. This, coupled with the shock loads common in demanding off-road machine duty cycles, can lead to premature failure.

As a supplier of heated DEF hose assemblies, Parker’s Parflex Division saw this as an opportunity to meet a gap in the market and set out to create a more robust SAE J2044 compatible fitting. “The goal was to create a fitting that could satisfy not one, but all the deficiencies of currently available SAE J2044 fittings for aftertreatment dosing systems,” Henry said.

The result of that effort is Parker’s new stainless steel J2044 compatible fitting.

While metal for female J2044 fittings is not a new concept, the core of the patent-pending Parker fitting design is a one-piece, machined, 316 stainless steel body that provides high strength, temperature resistance and long-term DEF resistance.

In addition, Henry said that as thermoplastic J2044 fittings are often designed for high-volume, automated production, this can lead to compromises, particularly when it comes to sealing. The conventional fittings typically require multiple components to create the sealing geometry for the O-rings that seal to the male J2044 endform. These components are inserted with the seals into the thermoplastic fitting body and use a retainer to hold them in place. 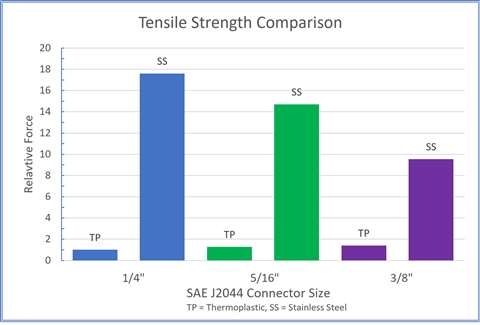 A comparison of the tensile strength of the new stainless steel Parflex J2044 fitting and thermoplastic fittings.

Parker’s stainless steel body incorporates dual O-ring glands and eliminates the need for an additional retainer and a low-profile stainless steel spring clip is used to lock the fitting to the male endform. “This reduction of sealing components by 50% and utilization of existing Parker EPDM O-rings is consistent with Parker’s Simple by Design engineering strategy,” Henry said.

The use of a stainless steel body was expected to provide a significant increase in tensile force, which was confirmed during validation testing, Henry said. “Improvement ranged from six times greater in the 3/8 in. size up to 17 times for the 1/4 in. design,” he said. “More importantly, the jump in tensile strength translated into real-world performance.

High temperature strength was equally impressive, he said. Test assemblies were fabricated using high-pressure hoses and then subjected to burst testing at 150°C. “Regardless of size, all samples achieved the 1000 psi limit of the testing chamber without failure,” Henry said. “The results demonstrate superior performance near hot exhaust components when compared to thermoplastic alternatives.”

Parker said the stainless steel J2044 fitting can be selected as an option in Parker’s heated, DEF hose assemblies in three (1/4 in., 5/16 in. and 3/8 in.) sizes and the stainless steel construction also makes it an option for coolant or fuel systems when matched with different O-ring compounds and other Parker Parflex hoses. The design can be combined with other Parflex fitting series without tooling, the company said, enabling it to be paired with myriad other Parker hose and tubing combinations.

This story first appeared in the June issue of Diesel Progress. For a free print or digital subscription, click here.