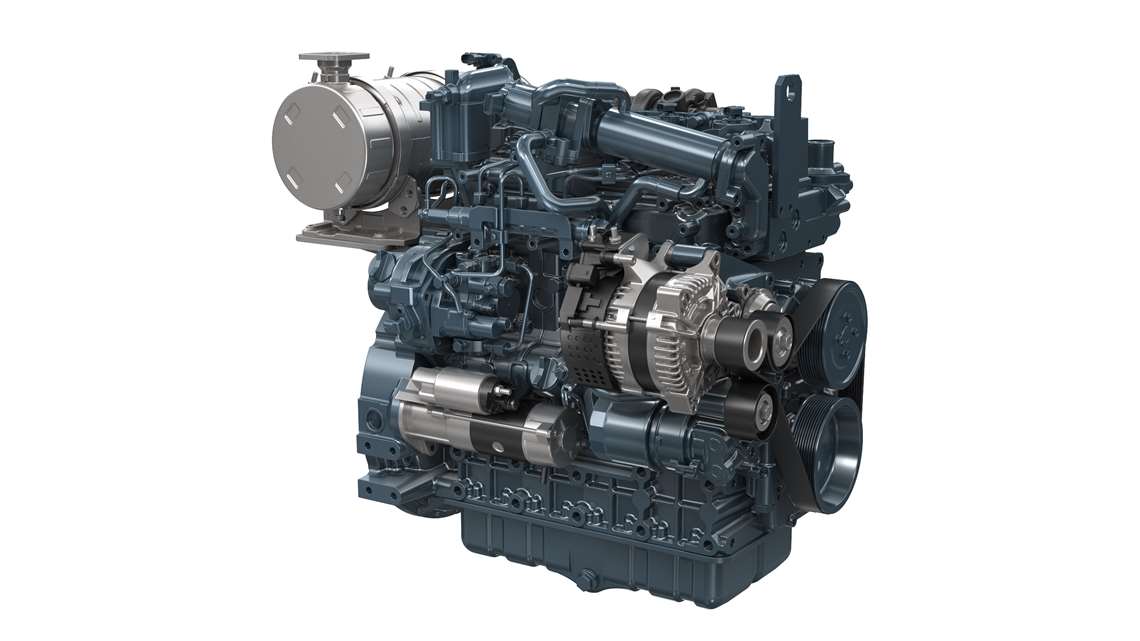 Kubota’s V3307 Micro-Hybrid prototype has made its North American debut. First shown at Kubota Engine America’s (KEA) exhibit at ConExpo-Con/Agg earlier this year, the company said it is looking for partners to begin prototyping the Tier 4 final and EU Stage 5 compliant system.

The power assist V3307 Micro-Hybrid system supports the engine by delivering an additional electrical power boost of up to 10 kW for applications that demand an immediate response to peak engine overloads within a typical machine duty cycle. The instantly available torque offers an efficiency boost, while recuperating and recharging its battery pack when not initiated, KEA said.

“We believe equipment manufacturers will gradually become less reliant upon any single power source and the engines themselves will need to further push the boundaries in areas of fuel efficiency, power density and adaptability,” said Tomokazu Matsushita, president of KEA, Lincolnshire, Ill.

Matsushita said that Kubota initially looked at the Micro-Hybrid system with other, smaller Kubota engines, but after discussions with OEMs over the last two years, found the 74 hp V3307 range as the most attractive right now. He added that wheel loaders, rollers, excavators, forklifts, even generator sets, are seen as potential initial applications. “I think there are many different applications that can be implemented,” he said.

Having essentially the same footprint as an engine, the integration of Kubota’s V3307 Micro-Hybrid system pairs electronic engine management control, making it possible that the system could be expanded for use with other Kubota diesel, gasoline, LPG or natural gas engines.

Utilizing and benefiting from an independent driveline, the Micro-Hybrid system maintains accessibility to the existing power take-off positions of a conventional engine, making it applicable to both existing applications and for new applications that may require a more compact design, KEA said.

“Based on our experience, we’re confident that the V3307 Micro-Hybrid system will offer greater opportunities for equipment manufacturers to harness advances in product design flexibility, optimization, efficiencies and total cost of ownership, while maintaining the overall machine performance and productivity,” Matsushita said.

“OEM customers want to talk about electrification. This is part of a global agenda,” said Matsushita. “They want to know what Kubota can do in this regard. We are proposing prototypes to them to understand how our system works.

“The feature they are most interested in,” he said, “is we can help them downsize the engine, if the engine is not requiring the peak output for a long time. For example, on rollers, the peak output is very limited for short periods of time. But because of that peak requirement, they have to use larger engines, SCR engines typically.”

“But with the Micro-Hybrid system, the OEM can step down the engine size and not require SCR. They can still limit the actual consumption of fluids in the field when they run the machines.

“For example, a three-cylinder engine, equipped with a Micro-Hybrid system can achieve similar levels of performance as a conventional four-cylinder engine, while avoiding the necessity to overcompensate by installing a larger capacity engine,” Matsushita said. “Working in partnership with the engine, the Micro-Hybrid system allows for reduced fuel consumption and lower operational costs, while offering an increase in work efficiency and value.”

As far as production target dates, Matsushita said the system could be manufactured as early as 2022, but that would require detailed discussions with OEMs, many of which have begun, he said.

“The key is the management of the various components of the system and that is the basis for the discussions with potential customers. Because in these applications, we are customizing our diesel or SI engines for a particular customer. There are a lot of options, and those are the discussions we are having,” Matsushita said.

“I feel that OEMs are still trying to evaluate their own demands for this type of technology,” Matsushita said. “Some OEMs are very interested but are a little cautious about their own markets. So, we are still very much in the development phase with this right now.”